‘The Nun’ mostly disappoints with a weak script and minimal scares that make this a lackluster entry in ‘The Conjuring’ franchise.

The film follows Irene, played by Taissa Farmiga, a young novitiate, who is teamed up with a priest with a haunting past (Demian Bichir) to investigate a mysterious suicide in a Romanian abbey.

Directed by Corin Hardy in his directorial debut, ‘The Nun’ is the second spin-off of the massively successful Conjuring films, after Annabelle. Created by horror master James Wan, who crafted the two excellent main films, the franchise has been attributed for reinvigorating the horror genre this decade, and has paved the way for other horror blockbusters such as ‘It’. Unfortunately, ‘The Nun’ fails to continue in those footsteps, delivering the most disappointing entry yet.

While Corin Hardy does excel with most of the visuals and acting, it’s in the script where the film falls apart. Written by Gary Dauberman, who has co-written the Annabelle films and ‘It’ to great success, the script proves to be lazy and cringe-inducing at almost every point, which makes you wonder how his contributions made the other films mentioned any better. 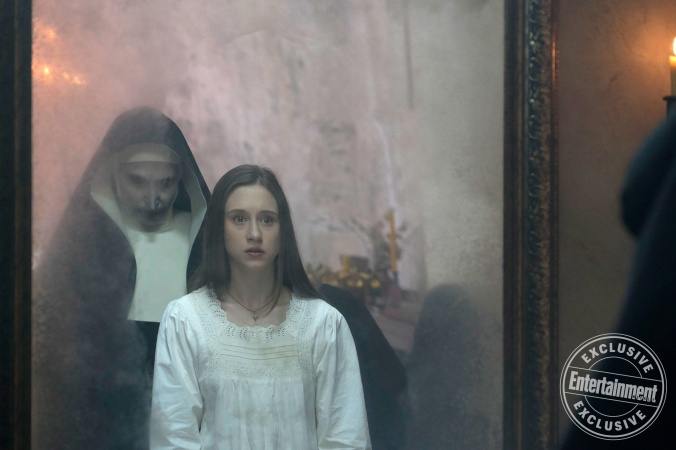 While some horror films tend to overcome this by being delightfully scary, this film fails in that aspect too. ’The Nun’ tries too hard to scare you, but it mostly fails, with most of its 96-minute runtime consisting of cheap jump scares. It’s even more disappointing when you compare it to last year’s ‘Annabelle: Creation’, an excellent film with incredible atmosphere and scares.

A character who has arguably been deemed the scariest aspect of the last Conjuring film, one can’t shake the feeling that they mostly waste it in order to create a mostly uninspired film with cheap thrills, falling back on the same horror tropes and clichés that almost killed the genre a decade ago.

It has to be said that, despite its wrongdoings, both Farmiga and Bichir both give excellent performances with what they’re given. Farmiga proves to be a delightful lead, and I wouldn’t be bothered if she came back in some capacity, as I also feel there was some information missing about her character that could be explored in a later installment (something to do with her resemblance to a certain character).

Lazy, boring and uninspiring, ‘The Nun’ offers minimal return and trades places with the first ‘Annabelle’ to become the worst outing of the franchise yet. Let’s just hope the filmmakers learn from their mistakes and we can go back to the usual horror delight this franchise is usually known for.