Avengers: Infinity War brings together almost every hero of the MCU, and while it can feel overstuffed, it benefits from a great villain and amazing action sequences.

This time around, the Avengers, along with the Guardians of the Galaxy and other new characters, must face their biggest and most powerful enemy yet: Thanos. They must stop him from finding all six “Infinity Stones” to prevent him from succeeding in his mission — kill half of the universe’s population in order to “balance” it.

It’s a huge joy to see the culmination of 10 years of movies finally come to fruition, something not seen since the end of Harry Potter. And while this is definitely not the end for the MCU, it certainly feels like a huge turning point.

The Russo brothers are directing once again after doing the last two excellent Captain America films, and you can tell just by marveling at the incredible action sequences they have done this time around, a signature of them. And while I’m not a huge fan of their usual color draining, they seem to have fixed it a bit this time around, with some scenes actually having, well, color.

While it often can feel overstuffed, they smartly go with the choice to separate the characters in several groups, which makes the film feel more personal. 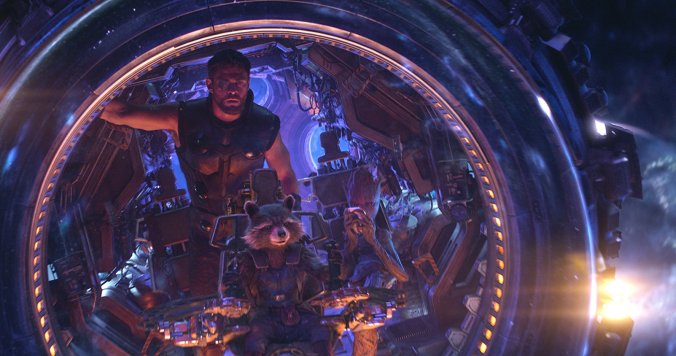 The writing, by frequent Marvel collaborators Christopher Markus and Stephen McFeely, is a mixed bag for me. They seem to excel at writing comedy and casual character interactions, but when it comes to dramatic scenes the dialogue borders on silly and obvious, which was surprising given their experience. The film also feels very rushed from the beginning, which, while at first exciting, you can sense a total 180 once the script lets the characters breathe — and makes the 2nd act not feel as exciting and very slow.

Perhaps the biggest point in its favor, and one which almost undoes all its negatives, are its characters, which have never felt as real and fleshed-out as in this film. The Guardians, Iron Man, Doctor Strange, Spider-Man, Cap, etc. are all masterly handled, and it’s because of them that the story works and the threat of Thanos is actually scary. The acting is also superb, as usual, especially from Robert Downey Jr., who continues to prove he is one of the finest actors working today.

But the best character in the film is not a hero — it’s Thanos. There hasn’t been a better superhero villain since Heath Ledger’s Joker, which is surprising given that you’d think a certain humanity would be lost because of the overt CGI, but props to Josh Brolin’s incredible motion capture performance and the writers for creating a very real and emotional character with a true motivation for his acts. The best villains are those who truly believe they’re doing the right thing, and here’s no exception. One could even say he’s the real main character of the film — he is given the most emotional character arc, and at times he even makes you feel sympathy for him. It’s a truly amazing creation.

Overall, Avengers: Infinity War might not be perfect, but its incredible characters, humor and unexpected and exciting directions it takes makes the experience completely worth it, and makes you look forward for what’s to come in the MCU.

Avengers: Infinity War is currently playing in theatres all over the world.